skip to main | skip to sidebar

I've been launching a few more sites. Visit www.realbulb.com if you need some proper, ordinary, sensible 60 watt and 100 watt lightbulbs. Yes, they are still legally available!
Posted by John Parry at 23:17 1 comment:

John Parry is no longer associated with Bombadil Publishing of Sweden, either as an author as an employee.

Fed up with the latest fad of "being green"? Bemused at the way politicians have gone from denying that global warming existed to suddenly putting "green" policies at the heart of their election manifestos? I am.

I'd really like to see our planet saved, but I'm rather dismayed about the way it's happening. It seems as though a lot of it's for show with no real though being given to the consequences of the growth of the "recycling industry".

Join the discussion at The Green Blues Blog

After a great long absence, I am back! Too many things have happened to go into here, most of them good things, but a few of them very disappointing things as well.

The main news is that following my kayak building endeavours under the skillful eye of Steinar Gustavsen, we have joined forces and launched (bad joke, sorry) High Sea Kayaks. See www.highseakayaks.com


We've put together an illustrated guide to strip building - this is information just isn't available anywhere else on the internet - and it takes you right the way through the process of building a kayak, step by step.

We also have a couple of designs available - as complete form kits.

I have been absent from the Bombadil blog for a few weeks now. No, I haven't been shipped off to Finland as punishment for eating all of the Bombadil biscuits, it's just that there have been rather a lot of public holidays lately. They invariably fall on a Friday, so we are not in the office.

I have been working on a couple of Bombadil's flagship projects, whilst at the same time wishing that things would move just a little faster. Sahil's fantasy adventure book is finally nearly ready, after we decided to undertake a major page referencing exercise on it. Perhaps not the most sensible thing, looking back on it, when I consider the amount of extra work that it generated, but it will make the book infinately more readable. It is a book that allows the reader to make their own choices throughout the story so it must be carefully checked, then re-checked, otherwise it will not make any sense. 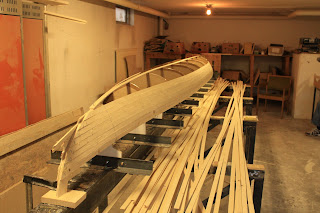 The May Fire at Örebro and the Archery Club party (in my villa) has been extensively covered by other Bombadillians elsewhere, so I shall not harp on about that. I am, with Steinar's help, building a kayak. I have recently discovered the joys of paddling along a river in a beautiful wodden crafy and so I have started on my own construction. It appears to be growing quite quickly, but I have a feeling it will start to take a lot longer once it is time for sanding.

I am also learning Swedish. It's not really neccessary as nearly everyone here speaks impeccable English (even the bums outside the off-licence) but as I have been here for a while now, I thought it was time to learn. It's going rather well (I'm on week two of learning).

Just about the biggest news at the moment is that ants have infiltrated the inner sanctum of my domain. Ants in my bedroom. I cleared up my pants in case they were attracting them, but no luck. Mari at the office suggested that I should put pepper down, which I did. Ants don't like pepper, but apparently they don't mind walking around it, so it didn't really work. Plus it got trodden around everywhere, so tonight I vaccuumed it up, which meant that most of it blew out of the other end of the vacuum cleaner and is now airbourne. We bought some ant poisin at the supermarket tonight, but it smells really bad. I think I prefered the ants, at least they didn't smell.
Posted by John Parry at 19:38 1 comment:

Sara and I have been working on the photography and illustrations for her book of poetry that will be published soon, Steinar's kayak is taking shape (and I'm told bounced as a result of being dropped, sustaining only very minor damage) and the website is looking a little more like a website. I've learned to make gifs!
Posted by John Parry at 17:14 No comments: